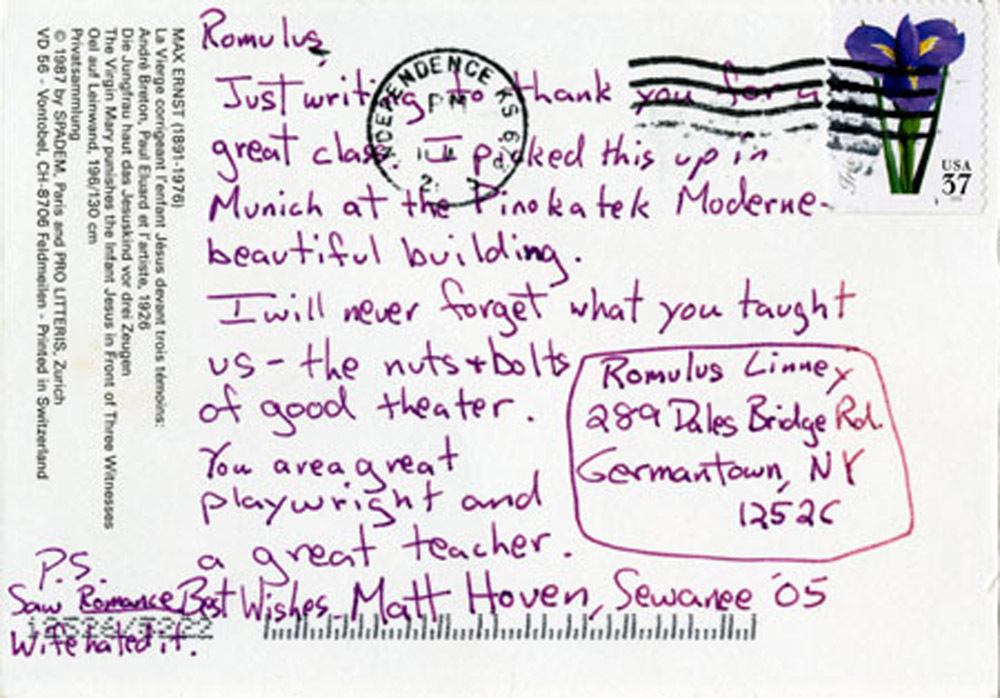 In 1963, shortly after Linney’s first novel was published, he began teaching English at the Manhattan School of Music.  By the end of his career, Linney had taught as an adjunct professor at Columbia University, Brooklyn College, Princeton University, the University of Pennsylvania, the University of North Carolina, Hunter College, and the Actors Studio Drama School, among others.  Linney’s students include Pulitzer Prize-winning fiction writer Jennifer Egan, playwright Gina Gionfriddo, and writers and producers of leading television series, such as Law and Order, Desperate Housewives, and The Big C.

Linney's Impact on His Students

Linney was a writer first and preferred to teach as an adjunct, minimizing bureaucracy and focusing his time in the classroom.  He was admired by his students for his passion and pride as an artist, his willingness to tackle difficult subjects, and his intimate knowledge of world literature.  Former student and Pulitzer Prize-winning author Jennifer Egan recalls Linney’s impact as a teacher:

"When I went to UPenn, I took a writing workshop with Romulus Linney, the playwright. He’s a really great teacher. And actually after I took that class I worked with him independently for a year. I remember still, bringing in a piece in which in the first paragraph, I noted that “the sky looked like the underbelly of a duck.” Romulus said, 'Do you see why that’s laughable?'"

Other students expressed their thanks for his guidance through letters, an example of which appears above. At Linney’s memorial service in May 2011, his former student Leslie Maslow spoke about his influence as her teacher:

"I first studied with [Linney] at Columbia in his "Fundamentals of Dramatic Writing" workshop. I was just an auditor. The rest of the students were in the middle of their MFA programs. Before the start of class, I overheard them chatting about philosophy and experimental theatre and I was terrified. Rom was sitting at the end of the table. He scared me too. He seemed imperious and ruggedly handsome. He just had "Artist" written all over him. When he started talking, he was almost combative, not in a harsh way but definitely challenging. He said to the class that he wanted us to write a scene with a basic emotion in it, like fear or rage. And I thought, hey wait, maybe I can do this. He gave me permission. In that moment, I gained the right to my seat in that room, and in every other classroom I sat in after that. Some of the students argued with him. Some were very uncomfortable. But there were many who took risks, who grew enormously as writers, and I was one of them."