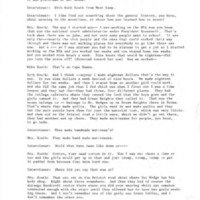 Ruth South talks about working with the NYA (National Youth Administration) under Roosevelt's New Deal policy and the classes she took on weaving. She has been weaving with homespun wool her whole life and sees homemade crafts as a very important part of life. It is certainly an integral part of the mountain community life during the early twentieth century. South also took classes in wood-working at Pendelum and Berea.