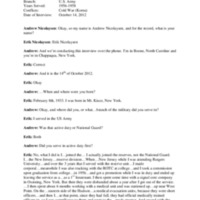 Eric Nicolaysen enlisted in the US Army reserves in 1956, served in the Cold War, and spent some time in Korea. He did not see any combat during his time in the military.

Richard Meyers, born October 2, 1980, enlisted into the Army in 2003. Current position as of 2011--Recruiting Operations Officer for Appalachian State ROTC. Served in Operation Iraqi Freedom (Iraq War) for one year, 2008-2009. In this interview, he discusses his experiences doing patrols and advising Iraqi border police in Erbil, a Kurdish region of Iraq.