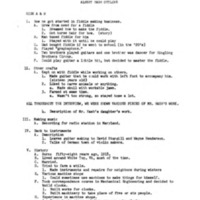 Albert Hash began making things out of wood at a young age. He had a dream as a child about making a fiddle, and did the best he could with the tools he had and a plank of wood. He continued to perfect his wood-working and carving skills and began to make more instruments. He also worked in clock making, farmed for a short time, and went to school for mechanical engineering.

James Oliver Shell was born on January 26, 1891 in Shell Creek, Tennessee where his grandfather owned a farm and worked as a carpenter. His father died when he was two months old, so his mother reared the children living with her father. Mr. Shell had one sister, a half-­‐sister, and four half-­‐brothers. As a young man James O. Shell moved to the Heaton community of Avery County North Carolina and was a farmer and served as the postmaster in Heaton from 1914 to about 1953. He died on July 4, 1980 at the age of 88.