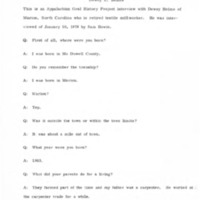 Dewey Helms, born in 1903, talks about working in McDowell County, North Carolina, in the early twentieth century. He came from a family of farmers and carpenters, and when he was old enough he began working in the furniture factory for eleven cents an hour between school terms. In 1923 he began working at the mill because the pay was better. He said the only other job you could get besides furniture and mill was the railroad, which didn't pay very well either. He eventually began weaving and repairing looms as a career.