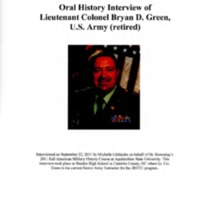 Lieutenant Colonel Green grew up in a military family in the 1960s in a small town, and saw his chance to make something of himself in the military. He didn't join right after high school, but went to basic training over the summer and started at ASU the following fall as a cadet in Military Science. He served most of his time during the Cold War. He now works for Bandys High School in the Junior ROTC program.

Colonel David Hubner describes his service in the military which spanned multiple decades. He began in Germany, was deployed a couple of times to Iraq, and moved around the United States to various training camps. He retired after his sons graduated from high school and his body began to show physical signs of wear and tear. He explains that serving one's community is necessary and being a part of the military allowed him to gain a solid perspective.

Rob Helton gives a detailed account of his experience in the military for 6 years 2003-2009. He was deployed to Baghdad and describes it as an interesting place, a mix between the ancient and the modern. He shares stories about his time abroad, his basic training in Fort Knox, and his experience returning to civilian life in 2010.