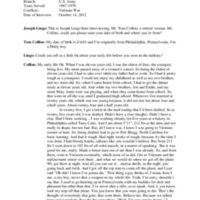 Sergeant Tom Collins, born in 1943 in Philadelphia, was drafted during the Vietnam War and went to Fort Bragg in North Carolina for his basic training. He entered the army and was trained as a military policeman. He served in Saigon on a patrol squad. He says to this day, even in civilian life, he doesn't trust people he doesn't know after his experience in the military and having to constantly be on the look-out.

The document of Leo's Honorable Discharge from the US Army in 1945. The reason for separation is stated as: "convenience of the government."

Charles Watkins talks about his service as a typist in Cam Ranh Bay, Vietnam. He spent a year overseas, and finished his 3-year service contract conducting mental health tests in the US.

Haston Gray Haymore is a veteran of the Vietnam War. He was deployed for one year and forty four days to Benewah, Vietnam, and worked alongside the South Vietnamese soldiers. He describes them as "good people" but very different from the Americans. Haymore states strongly his opinion that America should not have entered this war, that it was a useless endeavor and many lives were fruitlessly lost.

William Benson Marsh joined the Army Reserve in High School, 1944. The interview talks about his service during World War II, the USO shows to entertain the troops, basic training, and the dropping of the atomic bomb.

Barry Craig Forrest, interviewed by William C. Forrest, enlisted in the NC State University ROTC and the NC National Guard in 1980. He served 28 years in the Army as an armor officer and combat engineer. Although he served in the First and Second Gulf War, in this interview he mainly discusses his service in Germany.

Steven Wilkins, Lt. Colonel, US Army, was born on March 27th, 1960. In this Interview Steven Wilkins describes some of the places he has been stationed outside the U.S. during his military career. He talks about being in Korea, Central America, and the Middle East. He mentions his specific job while in the Army. He also discusses his decision and influences to enter the Army and specifically mentions experiences as a child and going through ROTC.