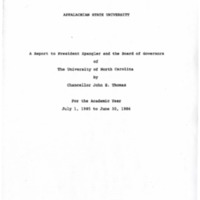 Appalachian State University Annual Reports: A Report to President Spangler and the Board of Governors of the University of North Carolina by Chancellor John E. Thomas, for the Academic Year July 1, 1985 to June 30, 1986

1985 was the first year that a waiting list had to be put into place because of the increase in admission applications. The Walker College of Business underwent many improvements, the Mountaineer Community was founded, a degree in Applied Physics became available as well as several summer study programs in other countries.