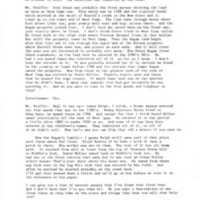 Sam Jones was born in Deep Gap, North Carolina around the early 1900s on a farm where he grew up. He worked at a sawmill.

Mr. Jones starts the interview talking about growing up on a farm. At this point his wife joins the interview, and they begin talking about berry-picking and produce. Mr. Jones also talks about working at the sawmill and the importance of the railroads in transportation. They both talk about their experiences with the Great Depression including topics of picking herbs, working, and church. Mr. and Mrs. Jones discuss the lack of doctors in the past and different home remedies they used. To end the conversation, the two recall the first time they saw a car and airplane.

Mr. Moretz earned B.S. and M.A. degrees from Appalachian State, and professionally was both a minister and schoolteacher with 39 years of experience. During the interview he reflects on how education has changed from the time when he was a youth through his career as an educator, talks about attending and teaching in a one-room schoolhouse, personal reflection on education, and local politics.