The following image has been generally identified as either a school or a church in 1880s Boone, North Carolina: 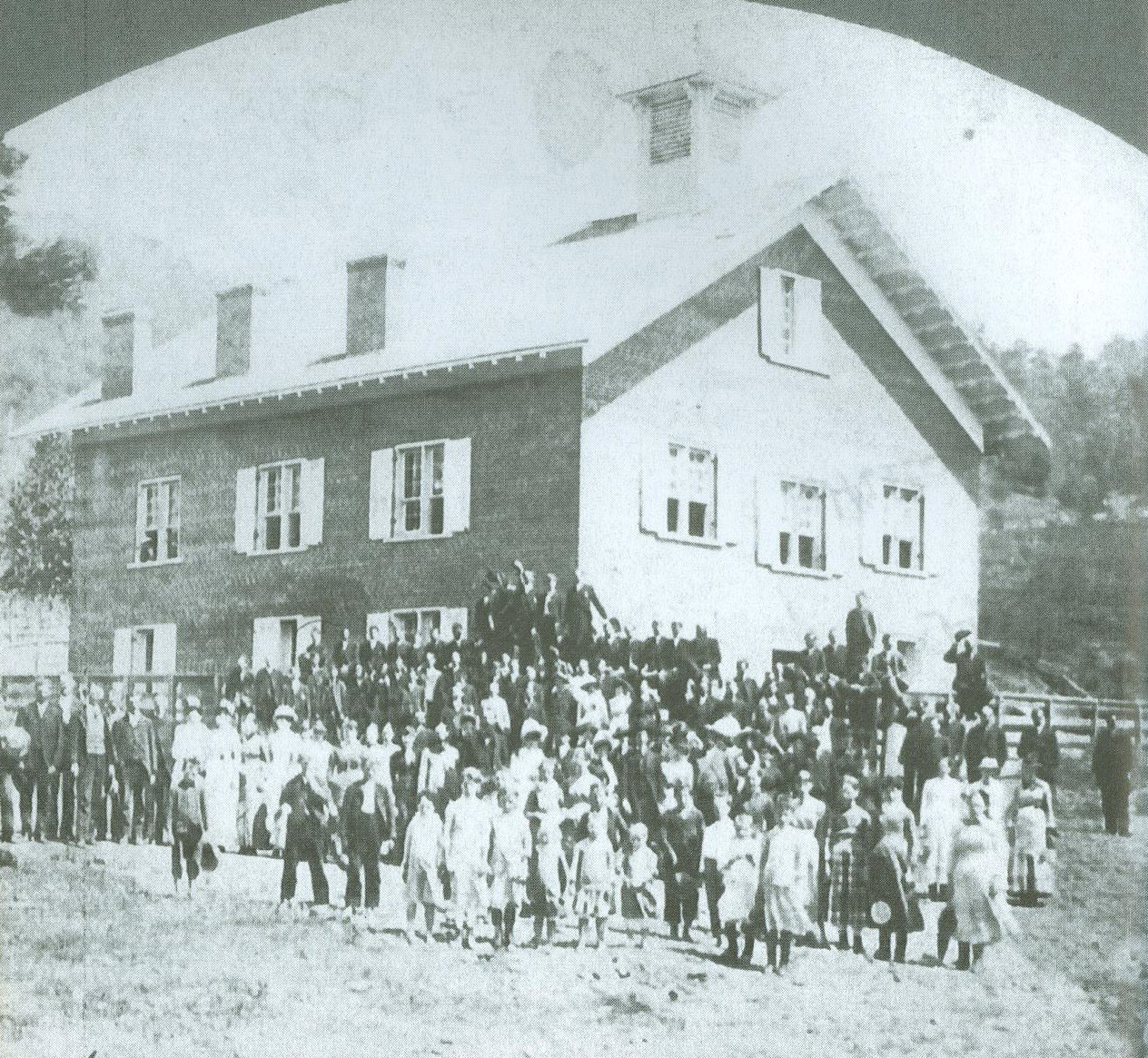 But based on recent research, I believe it to be the second (1875) Watauga County Courthouse, a building generally said to have not been photographed. My conclusion was reached from a number of sources: early newspaper accounts, Sanborn fire insurance maps, and especially later photographs of the same building.

The location of this building can be verified from the following photo, looking west across King Street: 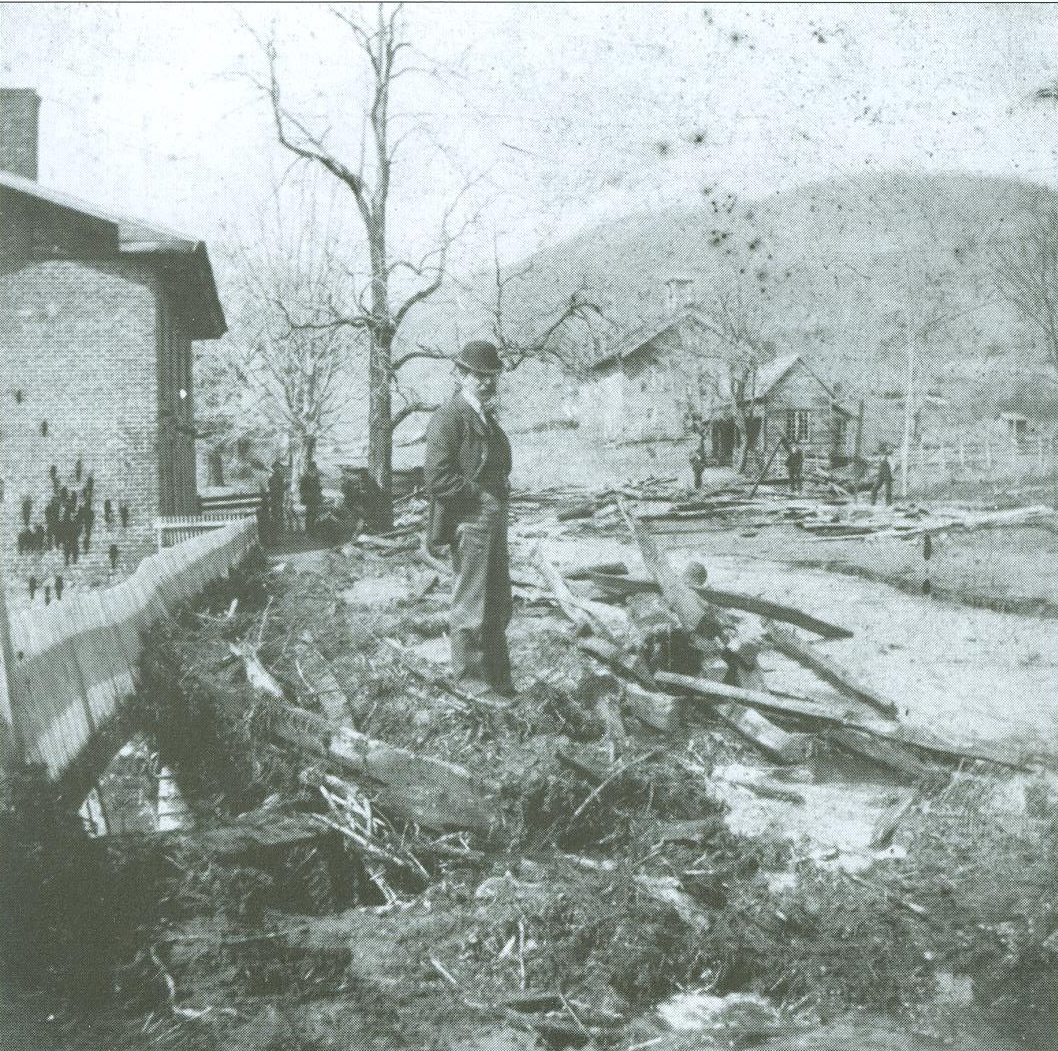 The small brick building on the left was the first location of the Watauga Democrat, on the South side of King Street, while the large building from the earlier photograph above can easily be seen to the west and on the opposite side of King Street, on a small knoll with Rich Mountain in the distance.

Here are two modern shots of approximately similar views, with direct comparison of the original photographs:

(looking west on King Street) and from the corner of Water and King Streets:

We know from historical evidence that the second, 1875 Watauga County Courthouse was on the northwest corner of King and Waters Streets, the exact location of the building in the first photo.

Any doubt as to the location of this particular building is removed by locating it in the following photograph from 1905, after the construction of the third (1904-1905) Watauga County Courthouse (to view from the original Digital NC site, click here): 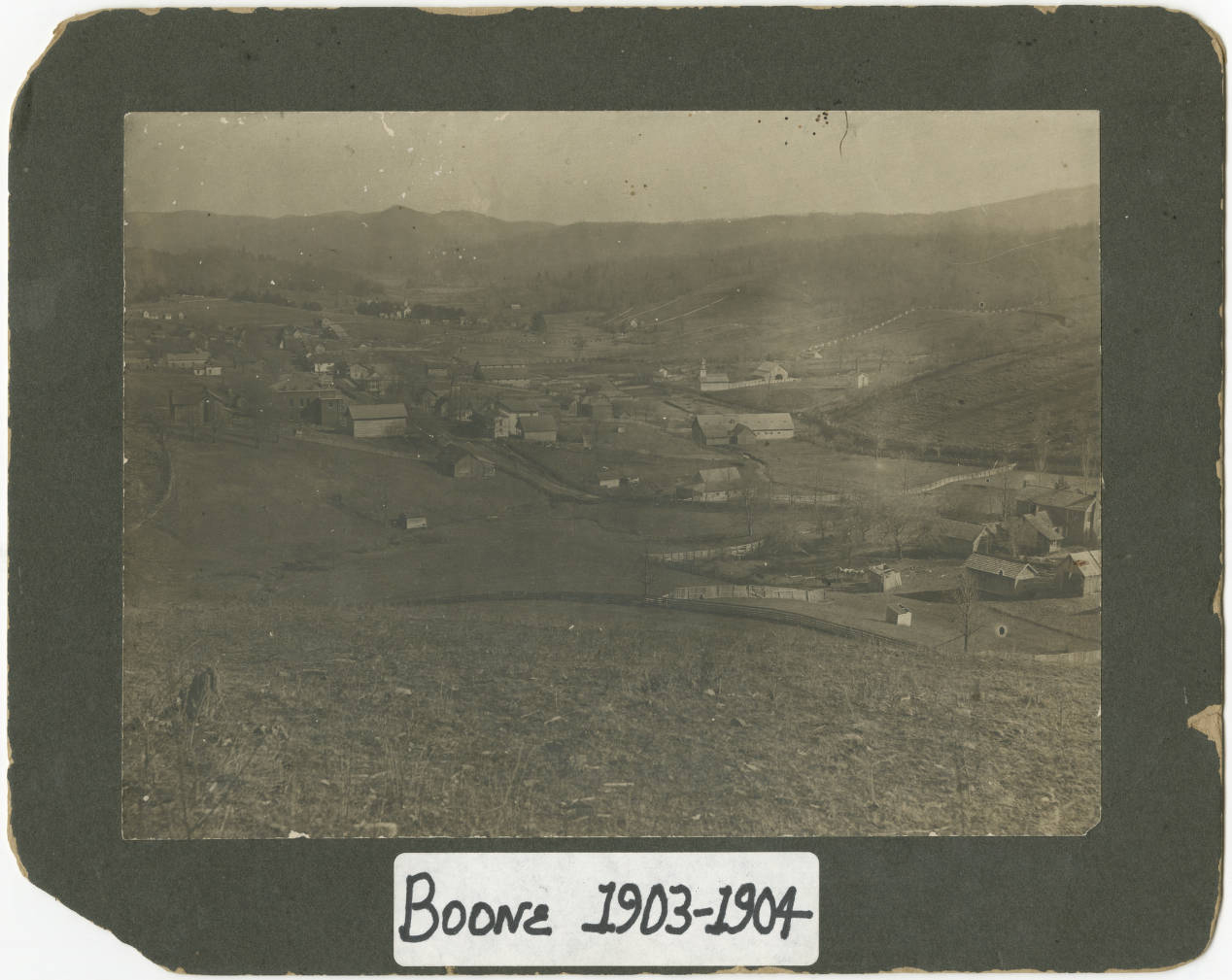 This distant eastwards view of the entire village contains much more clarity than is at first apparent. The presence of the nearly completed third courthouses dates the photo to late 1904 or, more likely, early 1905 (1903 would not be possible, since the courthouse construction did not begin until 1904).

If one zooms in on the courthouse (preferably from the original site), our building appears just to the right of the newer courthouse:

Close inspection of this photo reveals the belfry, three chimneys, and west wall with windows all similar to those from the opposite view of this building in the original photo:

Again, the original view of the east wall of our mystery building, photographed from the far side of the building (the side with the belfry), notice the shape of the belfry, the design and location of the windows and the three chimneys:

But did the second Watauga Courthouse have a belfry or even a bell? We know that it did, from a newspaper account of the transfer of this bell to the new courthouse: "The old court house bell that has swung in the same place for nigh unto 30 years was taken down yesterday morning and given a more stately position on the new structure." (Watauga Democrat3/23/1905, p. 3)

We also know that the 1875 courthouse had shutters, like those in our picture: "How would it do for the county to make a small appropriation with which to build a shed for the purpose of housing the blinds, door shutters, etc., that have, from time, fell from the remains of the old court house." (Watauga Democrat 6/18/1903, p. 3).

So our building is in the right location, at the right time, and bears the historical importance of a grand public building. The original photo shows what must have been, circa 1875, nearly the whole town of Boone in front of their new courthouse, but obviously, by 1903, there was little pride left for this building. The Democrat is full of bitter diatribes about the condition of the structure, the worst of which is quite probably this tongue-in-cheek notice: "We are told that application will be made to the board of managers of the World's Fair at St. Louis for room to exhibit our historic old court house, erected by the pioneer settlers of Watauga. A committee of three will be sent to St. Louis to look after a suitable site and should it be put on exhibit it will prove quite a curiosity to civilized people." (Watauga Democrat 2/12/1903, p. 3)

After much wrangling, Boone did get its third new courthouse, finished in 1905. It, too, was eventually looked upon as a dated reminder of a former generation, and was torn down for the present structure in the 1960s.

The subsequent history of this building helps explain why it was soon forgotten and why later generations failed to recognize this photograph. It was the original home of the Bank of Watauga, the county's first bank from 1905-1922. Extensive renovations were planned in the spring of 1906: "[I]t was decided at the meeting of the Bank Directors last week to very much improve their building this spring. The gables will be taken down and the front raised, making the roof, which will be of metal, practically flat. The banking rooms, when the building is remodeled, will be in the east, while the rema[i]nder of the building will be fitted up for offices. etc." (4/12/1906 p. 3). Work continued throughout the summer and was nearing completion in November of 1906 (WD 11/29/1906 p. 3).

It was then converted into wholesale stores, including one by the Eggers family selling fertilizer in the late 1920s. There is evidence that the roof and at least one of the walls was entirely rebuilt and a wood-frame addition was added before 1928. The Sanborn fire insurance map of that year shows a rectangular structure beside the 1904 courthouse in the same attitude as our building, but with the addition on the north side of the building. It is marked as a wholesale store.

In closing: This research is a work-in-progress and resulted from several weeks' work in the Appalachian Collection, the Watauga County Public Library, and the web. My initial skepticism about the identification of this building as the second courthouse has largely been overcome, but I realize that there are local historians with far more knowledge than I have been able to gather in the short time I have worked on this project. Please contact me if you have further information or disagree with my conclusions . . . Gary R. Boye, 14 July 2014.

Greta Browning, ASU Special Collections Reference Archivist/Librarian, found this photo in a recently acquired collection yesterday. This is probably the last photo of the courthouse (February 1962), before it was demolished, shown on the left here next to the original building: 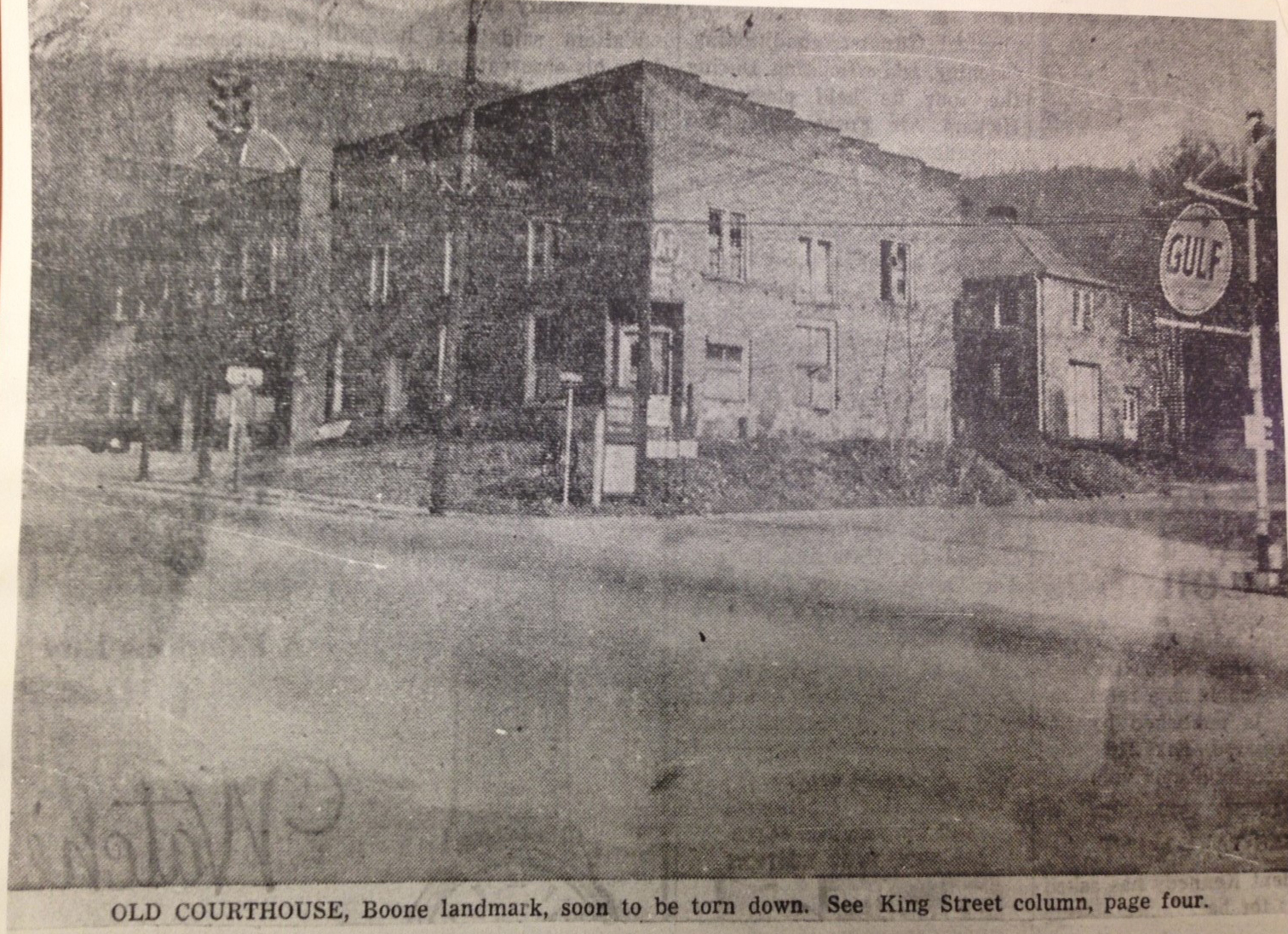 Note that not only is the roof gone, an angled door has been cut in the corner of the building, under what appears to be an A&P sign (Watauga Democrat 15 February 1962, p. 1). The 2nd floor windows are still in the correct place, although the first floor windows and doors appear to have been extensively changed. Thanks to Greta Browning for finding this photo in the Betty McFarland Papers.

"The old courthouse building, known by most as the former home of the Watauga County bank, at King and North Water Streets, is being torn down by its owner, W.R. Winkler, the old structure having long since passed its time of usefulness."

W.R. "Ralph" Winkler was the owner of the Pastime and Appalachian Theaters in Boone. Rivers also mentions the roof removal and other changes the building underwent when the 3rd (1904/5) courthouse had been completed. By 1962, it was vacant, without 2nd floor windows--a sad reminder of its historic place in the history of the town. Rivers concludes his article with:

"An old building must go, along with the people who aged too, to clear the way for newer structures and brighter faces, and the broadened horizons of a different age."