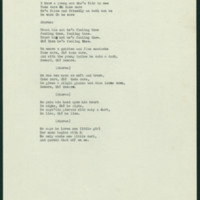 William Amos “Doc” Abrams (1905-1991), originally from Pinetops in Edgecombe County, North Carolina, was chairman of the English Department at Appalachian State Teacher’s College (ASTC) from 1932 to 1946. Dr. Abrams possessed both B. A. and M. A. degrees from Duke University, in addition to a Ph.D. from Cornell University. From 1946 until his retirement in 1970, he served as editor of the North Carolina Education Association publications. He was married to Lillian Cost.

Starting in the 1930s, Dr. Abrams built a reputation as an enthusiastic collector, scholar and promoter of North Carolina folklore. He served multiple terms as president of the North Carolina Folklore Society and contributed a number of articles to the society’s journal. A significant number of the folksong variants in his collection (some collected in association with Dr. Frank C. Brown and later with Dr. Cratis D. Williams) appear in the seven volume The Frank C. Brown Collection of North Carolina Folklore, published in 1962. Dr. Abrams received the Society’s Brown-Hudson Award in 1974.

The W. Amos Abrams Folksong Collection, presented here as part of the Documenting Appalachia digital initiative, consists of approximately 1,100 document pages that comprise some 400 individual song titles, most of which have multiple variants. The documents in this collection consist of both manuscripts and typescripts. Dr. Abrams collected titles from such acclaimed regional folk performers as Watagua County’s Frank Proffitt and Yadkin County’s Uncle Pat Fry. Dr. Abrams’ students during his time at ASTC also contributed many of the ballad variants herein, thereby expanding the geographical scope of his collection beyond the uplands of western North Carolina. Like the I. G. Greer Collection, the titles contained in Abrams’ collection range from traditional Child Ballads to 19th century popular music to compositions of local origin.

As part of the Abrams Folksong Collection, the Documenting Appalachia digital initiative presents the Field Recordings collection of Dr. Abrams. Recorded from 1938 to 1946, these songs were transcribed by Dr. Abrams in 1973. To introduce this collection, listen to Dr. Abrams himself.

Presented here is the Dr. W. Amos Abrams Speech Collection. These speeches were given by Dr. Abrams at various functions, conferences, and banquets throughout North Carolina in the 1960s and 1970s. The Documenting Appalachia digital initiative is proud to present you the opportunity to listen to these speeches.

The "So Mote It Ever Be" project was funded in part by a grant from the Blue Ridge National Heritage Area.