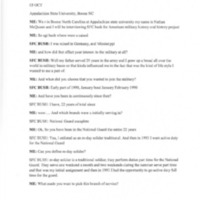 Jacob Smith, born in 1987, talks about his work with Operation Iraqi Freedom. He fought against Al Qaeda and explains that it wasn't as bad as the news makes it out to be.

Michael Nelson served in the Marine Corps as a part of Operation Iraqi Freedom. He describes his experience in Iraq as quite boring, and his basic training as much more lively. His greatest challenges have been adjusting back to civilian life.

James Farley served as a Medical SFC in the army for several years. He is a veteran of the Gulf War and Operation Iraqi Freedom. He began in the Marine Corps, but decided he wanted to become a combat medic and did his medical training at Fort Sam Houston, Texas. He continued to serve the army in the States until his retirement.

SPC Seth Crawley is a specialist in the National Guard and was stationed in Baghdad as part of Operation Iraqi Freedom. He was there for about a year fighting the terrorism of Al Qaeda. He explains that it has been hard adjusting back to regular life, especially on his digestive system and mental health.

Richard Meyers, born October 2, 1980, enlisted into the Army in 2003. Current position as of 2011--Recruiting Operations Officer for Appalachian State ROTC. Served in Operation Iraqi Freedom (Iraq War) for one year, 2008-2009. In this interview, he discusses his experiences doing patrols and advising Iraqi border police in Erbil, a Kurdish region of Iraq.

Francesca Johnson, interviewed by Steven Folts, was born December 14, 1977 in Anaheim, California. She enlisted in the United States Army in February 2000 and served in Operation Iraqi Freedom. In the interview she discusses her experiences in training and her job duties.